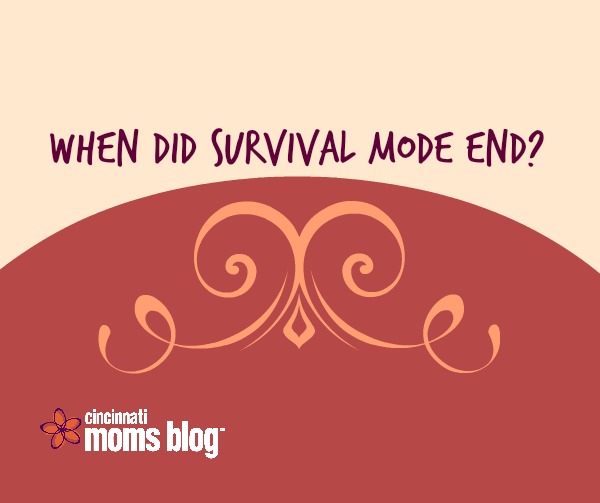 Survival Mode did not end, so much, as quietly fizzle. No one ever gave me a certificate with golden letters: “Survivor of Survival Mode!”

But I can promise you this: I spent years in infant-baby-toddler survival mode. And I can also look around me, at my circumstances right now, and tell you that I’m no longer there. So it must have gone.

I know it’s gone, because on Saturday mornings, my husband and I peer under groggy lids and tell the six-year-old to put on an extra show for his sisters, so we can sleep in like gluttonous house cats. The kid  squeals with excitement, every time, because An Extra Show! Wheeee! He can work the remote, that one, and if they’re hungry they can all pour a bowl of cereal.

I know it’s gone, because I usually sleep through the night. I still wake, sometimes, for nightmares, the confused child looking for the toilet, the stomach bug. I know that I’ll always occasionally wake, during the night, for one thing or another. But as a rule, I go to bed and stay there until morning.

It’s gone, in part, because my body healed. I don’t have anyone growing in my belly; I’m not feeding anyone with my body. The hormonal, emotional, and physical typhoons of pregnancy, childbirth, and nursing have subsided.

It’s gone, because my kids get themselves into their car seats by themselves, and I just check the latches.

It’s gone, because I can say, “Go get dressed,” and a kid will (usually) hop away, and return a few minutes later, wearing whatever-the-heck she felt like. Yes, she pulled every shirt out of her drawer, most likely, to find the right one. But she’s clothed, and I respect her crazy fashion sense.

It’s gone because they can go into the yard and play, with minimal supervision. I trust them to stay there, to stay off the street, not to eat the mud or lick the mushrooms or climb things they can’t. They are big enough to know those things. I can watch from the kitchen window, and feel safe. When the weather is nice, I can sit in a hammock and read a book.

It’s gone because my husband and I are experts, both in our kids and in each other as parents. We know what a virus looks like, how long it will last, and when to worry. We know how to plan a weekly menu so that we don’t have to go to the store more than once. Either of us can cook for a family with the ingredients in the cupboard, even if we should have restocked yesterday. We know what our basic parenting philosophies are, which took years of discussion and figuring. We are usually a team, cemented by six years of working side-by-side with our kids.

It’s gone, because preschoolers throw fewer curve balls than toddlers. They’ve already taken everything out of every cabinet and banged it together, so they know what noise it makes. They’ve tasted it all, they’ve climbed it all, and they speak the same language their parents do. Through their million messy experiments, they learned. They absorbed it all like sponges, and now they know what will burn, what will break, and what will drive mom ‘round the twist. Mostly.

It’s gone, because I gave up on some things. My floors are sticky. My wardrobe is Discount Bin meets Shuttup-I-Don’t-Care. By Friday, usually, after a full week of school and work, the laundry is in piles, there are Legos everywhere, and dry shampoo is starting to show. But that’s part of the plan. Over the weekend, we’ll reset, and get ready to go again.

It’s gone because when it returns, briefly, when the kids decided to go all WWF-Jedi-Battle–Light-Saber-Chop in the basement, when someone gets punched and is bleeding, and dinner is boiling over, the shoes are lost but we’re  running late again, there’s a homework sheet to nag a kid through, and we’re trying to squeeze piano practice before bedtime but forget that no one’s showered for days, I notice. The chaos is there, in moments, but it’s not ever-present. We generally have a groove.

It’s gone, because when it returns for longer periods of time, I recognize it and call it by name, like an old friend who is kind of a pain in the ass.  It’s there, of course, for The Great Family Virus Round XVII, say, or for spousal business trips, or family emergencies. “Pizza for dinner!” I say. “Unlimited TV! Showering is for amateurs and sleep is for the dead!”

One of the quintessential parenting truths is this: It never gets easier, it just changes. My kids are still very young, and I have no idea what celebrations and heartbreaks the future might hold. I’ve never, for example, had a teenager (and I’ve heard that can be rough!) I’ve never faced a truly serious health scare or injury. I’ve been lucky, blessed beyond belief, to have had such normal challenges. To pat my own back feels like hubris incarnate, and like the mother of a three-month-old who happily crows, “He’s sleeping like a dream!” I worry that I’m tempting fate.

But, I have certainly felt stretched, frazzled to the point of breaking, lost, confused, and like I was barely holding on.

We’ve all gotten wiser. We’ve all gotten stronger. The calm comes in larger chunks now, speckled with moments of chaos. It’s mostly fun, being the mother in our tiny zoo. I suppose this is Life Mode. The Salad Days. So far, we’ve survived.

Are you still in survival mode? Check out this post for the perspective of a mama, still entrenched.