There’s a study out there on the interwebs that says the most stressful number of children to have is three. As a mom of three, I have to agree. Don’t get me wrong—my three children are wonderful people, and I would never change a thing about our family. But there have been times when I wondered if I was in over my head. So, when I saw my friend’s announcement on Facebook, my reaction was equal parts OH, WOW! 😀 and Ohhhh, wow. :/ I was honored that she asked for my tips on being the mom of three littles all under five years old because, of course, I have some ideas.

Simple, repeatable systems for the things you do over and over. 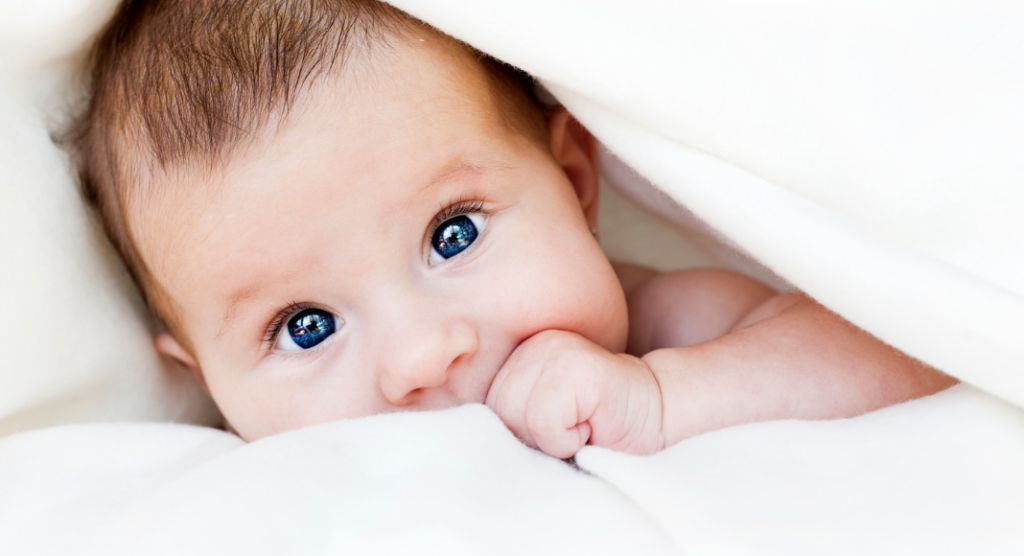 I mean things like grocery shopping, getting in and out of the car, and bedtime. My husband always thought I was over the top nuts about a regular bedtime routine. We had bath time, then brushed teeth, had a drink of water, put on pajamas, read two stories, said goodnight to all the stuffed animals, snuggled for ten minutes, and then lights out. NOT brush teeth, THEN bath time, or skip ANY of the steps….Why not? Because I said so. Just kidding. Two important reasons: first, when kids can predict what will happen, they are calmer and much less likely to whine or try to get you off track. Bedtime with three children takes long enough. If you are not prepared and consistent, you will never get everyone to sleep. Second, I didn’t have to think about it or make any decisions. By 8 PM, after a day with two small children and an infant, I was toast. A routine eliminates the need to think.

Again, consistency and routine eliminates whining, decision-making, and tantrums. If the red cup is always Johnny’s and the blue cup is always Molly’s, then they don’t need to fight over who gets the red cup. It also helps you be a little more organized without trying too hard, which if you’re me, is super important. It might not seem like it will be hard to distinguish the four-year-old’s socks from the two-year-old’s socks, but trust me—it’s impossible. My 12-year-old had eight pairs of shorts after I folded the laundry last week. My 14-year-old had none. That’s because they wear the same size and have the same color preferences. If I had followed this rule, one of them would own black and khaki shorts, one would own navy and gray shorts, and NO ONE WOULD BE NAKED RIGHT NOW. Seriously, it’s worth a couple of extra bucks to get socks with red letters on it for one kid, blue letters for another, and green letters for the third. Spring for the monkey/ladybug/frog plates and matching cups. Give everyone a towel and toothbrush in their own color. You will thank me later.

These two words will save your life. Or at least save you from starvation and a million hangry tantrums. You’re not going to have time to eat, much less cook, and unfortunately, your house is about to be filled with growing, ravenous children for the next two decades. So you need to plan ahead. The time for planning dinner at 5 PM and eating at 6 PM is over. If you don’t have a plan and start cooking until 5 PM, you will be lucky to eat before next Tuesday. So, take part of your Sunday afternoon or whenever to cut up a big salad, mix a giant vat of pasta salad, bake a pan of mac-n-cheese, and grill some chicken breasts. I promise—it will save you.

Get a backpack that you love.

For my first baby, we had “the weekender” diaper bag for longer trips, but most days I carried a cute little purse-like bag that held a couple of diapers, a small wipes container, and other do-dads we needed for a day out. When you have three children, don’t bother. Save your shoulder—you’re going to need it someday, and get a comfortable backpack that can hold enough stuff to stock a daycare. Then, later, you can use it when you have a t-ball game, ballet recital, and meet-the-teacher all in one day with no chance for a pit stop at home. Plus, a backpack doesn’t require any hands, which is good because you aren’t going to have any available. In fact, get any tool that helps you with a task you used to use your hands for. Over the next few years, your hands will be tasked primarily with keeping three small humans from running into oncoming traffic or hurtling themselves off high things like playground equipment. So go ahead and buy anything that helps keep your hands free. Baby carrier—yep. Water bottle holder for the stroller—yes, please. Belt loop key bungie—I just made that up, but sure. Treat yourself. 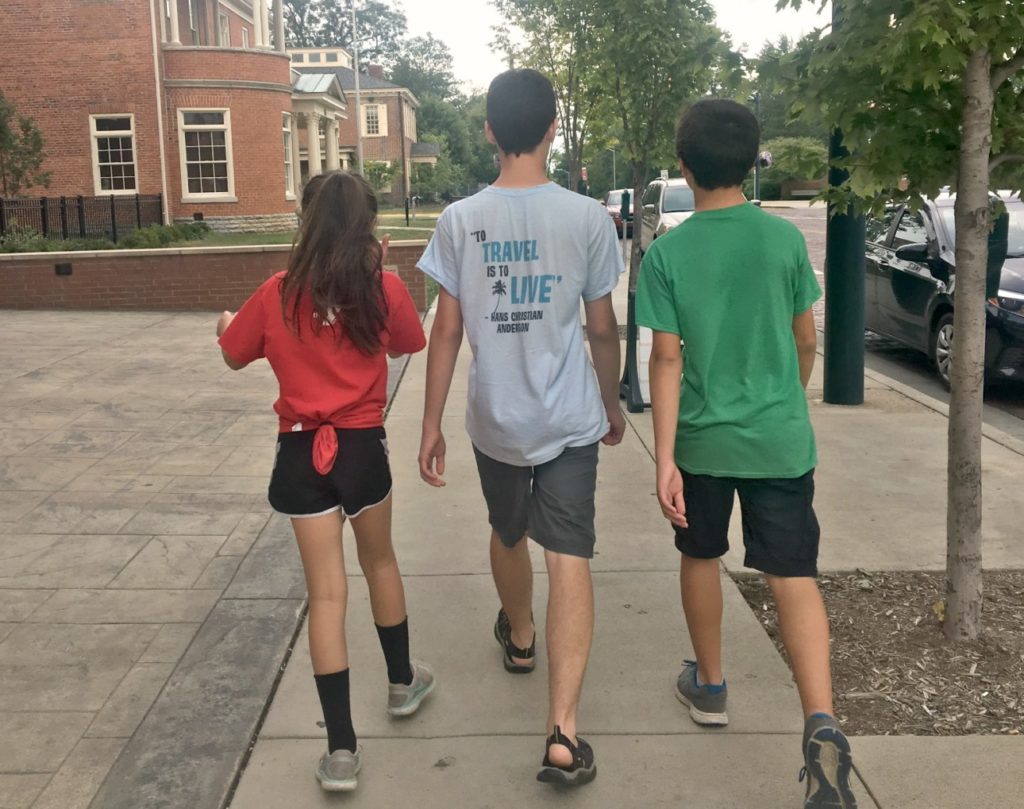 Have a safety rule and a scary mom voice.

That you use only when absolutely necessary. Another thing about not having enough hands—you can’t always count on having a free hand to stop one of them from darting into traffic or running out of sight down the next grocery aisle, where Creepy McCreeperson surely lurks. With a baby in one hand and a toddler in the other, the third child has an opportunity to get into all sorts of trouble. My rule was that when I say, “Hands on the car/cart/stroller!” they put their hands where I said or risk Mommy losing her mind, which was way scarier than a speeding car in the parking lot. Each kid only had to test this rule once to decide it was probably better to just put their hands on the car. (What makes this technique work is that when you are serious, you are as serious as a heart attack and that you are not so serious about everything else. But that’s probably a whole other discussion for another post.)

Think carefully about how the traditions you start now are going to look in a few years. Will it cause serious stress to continue this tradition with three instead of one or two? Will it cause major issues to continue this tradition with three teenagers instead of three toddlers? Ask me how I know. Do you have any idea how hard it is to find matching Christmas pajamas for adult-sized teenage children in a print and style that they are all willing to wear? Yeah, we (meaning me) had to adjust expectations in this area. Traditions are great and make wonderful memories, but think carefully about how you want them to play out over the next eighteen years. Do you really want to make the tooth fairy paint each and every dollar bill for a gazillion lost teeth with pink glitter paint before she drops off her loot? What about when you’re on vacation? Or have the flu? Or when you’re at Grandma’s house? Trust me—think these things through.

Eventually, every kid goes to school. It might be preschool, elementary school, college—whatever. Then you can give up the naps, but until then, DON’T DO IT. Tons of people told me that their kid “gave up” naps when they were four or three or even two!! Not at my house. Yes, my kids went through stages when they wouldn’t nap. We continued with our routine, and most of the time, they went back to napping. At some point, I introduced quiet time. Quiet time was just like naptime, but if they chose not to sleep, they could do something quiet in their room. Rules included 1)staying in their room, 2)doing something quiet that didn’t disturb me or other napping children, 3)not making a giant mess. It took some training, but it was worth it. My kids all napped or had quiet time until they started full-day elementary school. Kindergarten kicked their butts, and even the ones who had been doing quiet time regularly went back to napping for almost all of kindergarten. Kids need rest. You need rest. Don’t let naps go. Ever. Never ever.

As the Mom, I sometimes feel like I am the Sun in the center of my family’s Universe. Don’t believe it. Each person has a unique relationship with every other person in the family. Do your part to make those ties positive and strong. Don’t dominate conversations between them. Let them work it out. Gently offer reminders of how we show love to each other and how we act when we are angry. Never compare them. Give them time alone together. Enjoy knowing that when you aren’t there, they will have each other.

Give up the myth of fairness/equality/sameness.

Whatever you want to call it, there will be little the same about your three children. The first two are likely opposites. The third one will be opposite of both of them. I don’t know how that’s possible, but it just is. Plus, no matter how hard you try, you can never make their experiences the same. The oldest will have the experience—however brief, of being an only child that the others can never have. The younger two will never have the same, inexperienced parents your first born did. Good or bad, each will be different in personality, experience, preferences, self-control, tastes, how they were parented, how they remember their childhood—all of it. My motto is always, “We don’t all get the same thing. We all get what we need, which is different for everyone.” That doesn’t feel like such a big deal when you think about one of them who will need piano lessons, and another will want soccer camp. What will feel like a big deal is when it’s you that they need. At various times, each will need more of you than the others, AND THAT’S OK. Don’t feel guilty about it. 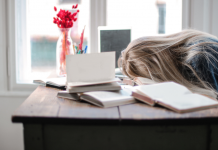 Go Ahead – Quit! {Teaching My Kids a Valuable Life Lesson} 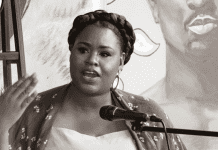 Elissa Menefield - April 29, 2021 0
As we all navigate the choppy waters of unlearning our conscious and unconscious racial bias, it is an important part of the process to...

May Guide to Family-Friendly Events in Cincinnati & NKY {2021} 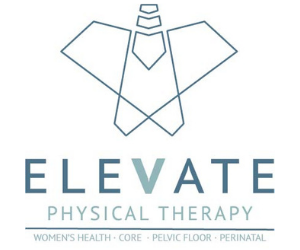 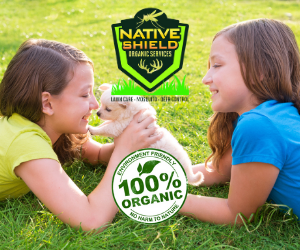