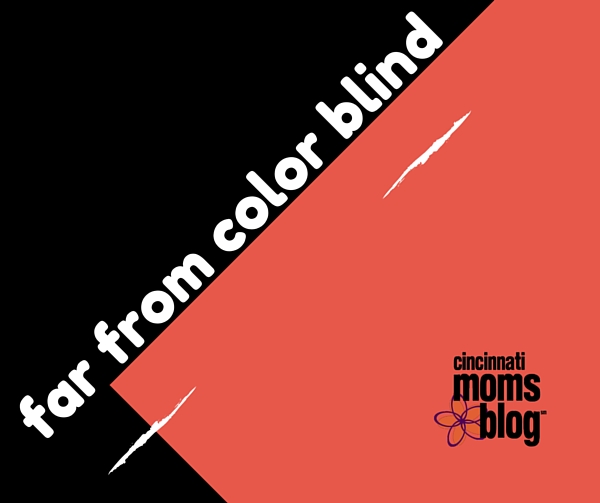 As white parents of a black child we are learning how to deal with racism. How are we to respond to comments, not made to our child, just in the vicinity of adults? When someone slips and says something without thinking of this child we love. Not out of anger, not made to be degrading, yet a comment made.

A bad choice of language. Words that could cause pain. An apology is made and it is considered over. It is a part of life. Maybe it doesn’t seem to be a huge deal to us because we have never had to deal with this word-not as children, not as a derogatory comment towards us.

Now it seems that these things, we as white people, have never had to deal with are staring me in the face. As a white mother of a beautiful perfect boy with carmel brown skin, I didn’t see beyond the beauty of his skin. I knew there would be things that would arise in his future – that would be different for him, but how was I to know the extent. I have not lived it.

I am sad that we live in a time where there is a divide among races. You can say there isn’t, but it is apparent to me. Maybe this is brought on more by media and maybe it has always been this way. Maybe I am more aware because of my son. I worry about things for him that I do not fear for my blue eyed daughters.

I am the first to admit that growing up in a predominately white neighborhood, I used to see a teenager of color walking on the streets and think- what is he up to? Maybe it was because I wasn’t used to seeing anyone different, maybe it was just that is was a male in general, I’m not sure. I grew up in a family who was very accepting of everyone. I never heard derogatory words or comments about other races in my home. One of my closest friends in elementary school was black. But, the thoughts crept up none the less.

Now, I am a mother of someone who will be a gorgeous black man. More than likely, judging by the size of his feet, a large black man. With big brown eyes and fuzzy hair. Now, when I see a teenager walking down the street, especially a black teenager, I am more likely to think of that kid as my own. Think of who his parents are and what they are doing to try and keep him safe.

As the white mother of a black son, it is my job to ask for help from those who can relate and figure out the things we need to do different to keep him safe. I welcome advice from others who have walked the path I walk with my son.

Because even though love sees no color, the reality is that he is black. He embraces his brown skin and he is proud of it. We are proud of who he is and part of who he is, is the color of his skin. So as we continue to raise this sweet, gorgeous, smart and rambunctious little boy we can only hope that the world gets to a better place by the time he is out on his own. That we raise him to make good and right choices and he is not put in situations where the color of his skin will make a difference. Do good-be good-surround yourself with good. That isn’t always realistic and we know it. So, as he gets older we will do all we can to prepare him for the reality of being a man with brown skin in a world that is far from colorblind.