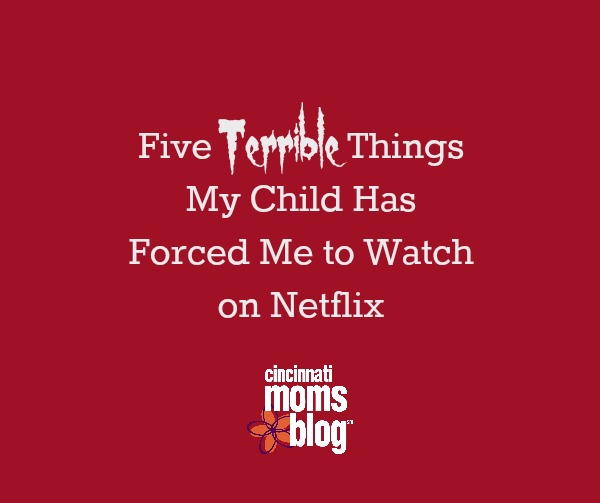 My life has not been one of regrets. Sure, I wish I would have gotten over my stage fright and tried out for one of my high school plays, and in retrospect selling my trusty bass amp to buy an expensive full stack I rarely used was pretty foolish. Yet, since I have become a parent my decision making abilities have become a bit more refined.

But regrets, I guess I have a few.

For example, I thought I was doing myself a favor when I taught my son Milo how to navigate our Netflix account. I showed him how to turn everything on and pointed out the buttons used to pick something to watch. I’ve since learned that was a mistake.

To my own defense, sitting out the couch listening to him yell “DOWN! OVER! NOW OVER! GO BACK, GO BACK! GO OVER!” was insufferable. After all, there is only so much “NO! NOT THAT ONE! NOT THAT ONE!” a person can take.

To be fair to Milo, he’s gotten a lot better with it, but he has an uncanny knack for picking really terrible things to watch. Here are five of the worst.

One of the hottest new hobby trends are coloring books for adults. My wife has a couple that she spends time with. If I want to color, I usually pick out superheroes or ninja turtles.   Coloring can be quite therapeutic and relaxing.

Watching crayons color in a simplistic pond scene shouldn’t be too bad, but the repetitive screams of “GREEN! YELLOW! GREEN!” make it hard to relax. Milo would sit and cheer for his favorite colors to be picked like it was a sporting event. Yet, it isn’t very exciting when you realize they always pick the fourth crayon from the left.

Perhaps the most offensive part is the mustachioed eraser man who constantly fixes their mistakes. Fools! You can’t erase crayon!

In a world where most kids shows are variations of older ideas, the message of this one is pretty unique. Whenever you have a problem, just resolve it by being a terrible, sneaky brat to everyone and everything.

Granted, some of the characters who Henry is horrid to deserve what they get. (Often over-sized women for some reason.) Yet, as a teacher who has to work very hard to remind my students, just because somebody does something bad to you, doesn’t mean you have to do it back, the lesson of Horrid Henry seems counterproductive to normal human values.

I could get it if we were supposed to learn from Henry’s mistakes, but we don’t. Even when being punished, he takes advantage of the situation and uses his horribleness for personal gain. His mom and dad may instruct him, “Don’t be horrid Henry,” but he always is, and so is the show that features him.

Milo was in the wrong profile when he managed to pick this one. Excited by the dinosaur action of Jurassic Park, he got one look at that spooky lion’s eye and figured he’d give it ago.

I remember when this show first came out. I was still a kid myself. It didn’t take long for me to realize that the show was a cheap Pokémon imitation, and was pure visual and auditory garbage. But, Milo just can’t turn away from shows about little animated monsters it seems.

I suppose the problem I have with this is that it makes no sense. Little pink blobs can evolve… oh, wait, “digivolve” into different creatures. There are seven monsters, who have unique names, and each one has like seven forms and each form has its own name, so to follow the plot you need a fifty page field guide, only to realize the plot is “Digi-Kids are transported to a Digi-world and befriend Digi-monsters who like to Digi-volve.” It leaves me wanting to Digi-claw my Digi-brains out.

If you have to ask, you’ve obviously never seen Caillou.