I have a 100% death rate for any plant that I have attempted to grow.

Cacti, Pathos, Snake Plant? All dead. All other plants, also dead… maybe because I don’t even know the names of them. Too much water, not enough water, too much sun, not enough sun, too cold, too hot… there are just too many variables, let’s be honest.

My mom can grow anything. She can do it from anywhere. She has been known to “rescue” volunteer trees, replant them, and watch them grow taller than her grandchildren! Impressive.

When my son asked to have a garden, “no” was my first answer.

I especially declined since he wanted to do everything from seed. Who does that?

Additionally, our yard isn’t the greatest. It is basically one giant slope. Since we are in the process of trying to get it leveled, I didn’t know what we may have to tear up later.

I am one to read about anything before we start it. Because gardening doesn’t come easily to me, I really didn’t know where to begin. Checking out books, online tutorials, blogs, and Pinterest haven’t helped up to this point. It wasn’t going to help me now.

But what is the harm in letting him at least try?

At worst, he fails. If he plants those seeds and nothing happens, we would be in the same boat as if he didn’t even try – he grows nothing. EXCEPT… except that he gave it a shot. We could turn it into a teachable moment with questions: Why do you think it didn’t grow? What could we do differently next time? Is it something that we did, or was it environmental?

All of a sudden, failure wasn’t sounding too bad. Loss was seemingly more like gain, in this case. He could learn from it… hopefully.

At best, he succeeds. If he attempts to grow this garden from seed and actually watches even a sprout emerge from the dirt, that is good, right? That would serve a purpose and that was enough.

We went to our local orange retailer and bought seeds, seed starter containers, and seed starter soil. Is all of that necessary? I have no idea… it just sounded right. I mean, we were starting seeds. Equally important to mention again, neither of us knew what we were doing. Marketing at its best.

My son had full reign as far as what seeds and how many to put in each little container. He was responsible for growing them; he knew this. He had to water them when he felt necessary and bring them in at night (because we started in early May).

When they began sprouting, it was heavenly; He was so very proud of himself–satisfied and well-pleased.

The Mister and I were also amazed since it is well-known that I can’t grow anything, and yet here was our little mister actually seeing life emerge from his own doing!

The plants began to get too big for the seed-starter containers and he had to move them to the planters. He got to choose which plants shared a bed since we were on a budget and didn’t buy enough beds for each plant.

First order of business that we learned the hard way? Drill holes at the bottom of the planter boxes. It, evidently, says that on the bottom of the boxes, but I didn’t know that when we started. Why wouldn’t the manufacturers just add them? I hope that you already knew this, but if you didn’t… hear it now! Otherwise, your plants will likely die; Furthermore, you will have a planter of disgustingly stinky soil of which to dispose! 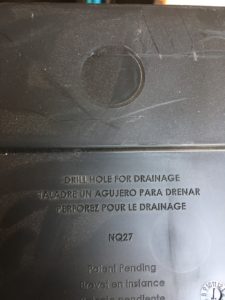 Results at this point:

This kid has grown an enormous zucchini (I’m talking 12 inches) with two more right behind it!

His pumpkins are establishing themselves just fine. All over our patio. He had a couple little tiny pumpkins for a bit, but then he went to summer camp. I may not have loved on his garden as much as he does. We learned that pumpkins take a lot of water… I may not have been doing enough of the watering, either. 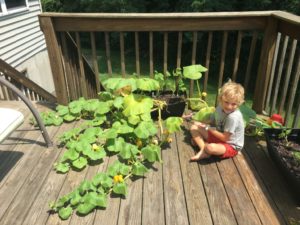 His watermelon are growing, though nothing much is happening as far as bearing fruit. The little plants are very pretty.

Turns out, the bean stalks needed to be tied up so they would continue to grow up… and sure enough, they have pods on them. We may have picked them too soon, though. We’ll have to research how to know when to pick beans!

The carrots… well, they didn’t make it. There are a few reasons, we have concluded. We probably planted too many seeds too close together. In those few days where we were getting monsoon-like rains and flash-flooding, the rain managed to drench the green part of the carrots.

Same for the kale… they were being swallowed up by water. They were in the box that retained the most amount of moisture – which, in turn, taught us to figure out why water wasn’t leaving the box – no holes, remember?! Something was eating the leaves of the kale, too. We will try again with that, since he and I both love that leafy green.

The tomatoes… these were really what he was looking forward to eating. Up at Grandma’s, all the kids just pick the tomatoes right off the vine and plop them in their mouths! The tomatoes were in the same swampy box as the kale. We had to switch them out to another box since we didn’t drill holes in the first one. They were immersing themselves and even falling over (growing roots from the stem) in the old box. Ick! Some of the plants still have yellowish leaves, which we have learned means that they’re getting too much water. However, they seem to be doing well. By that, I mean… they’re not dead. Which is really saying something for me!

So what, according to a six-year-old, is the key to happy, healthy plants?

And NOT in that order.

Truthfully, that is what kids need, too! That and a little “yes” sometimes! At the end of the day, what is the harm in trying?

You may be surprised with the results!