I like things organized. Neat. Just so. There is a good chance my gravestone will read “Don’t forget to put away your things.” My family and friends know this. They know I can’t go to bed with dirty dishes in the sink and piles of stuff on my kitchen island makes me crazy. My perfectionist tendencies have relaxed a little as I married a messy man and had my son and in return, they have learned to be neat-ish.

But with my daughter, I have met the enemy and she is a hoarder. 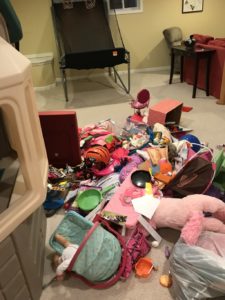 Here is an aerial view with a beer. It did not get any better: 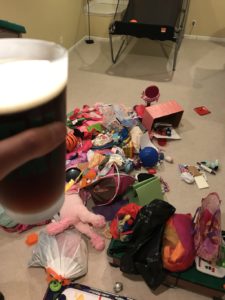 I decided to clean up and organize the basement while my family was out of town. My tally: 10 different bags and 5 purses packed with various items depending on the task she was imagining, every Scholastic News she brought home from second grade, a cinnamon stick (!?), a pair of gray size 7-8 girls pants (owner unknown) and 80 billion rainbow loom rubber bands. That was before I emptied the “Hoarding House of Death,” otherwise known as her playhouse.

This is not a new development. We nicknamed her Destructo at the tender age of eight months as the trail of disaster she left in her wake was unprecedented. But now, after eight years, I officially give up. I have tried everything. I have tried to make her neat. I have tried to ignore the mess. I have tried to give her ownership of her space. My latest attempt was a compromise where the mess is contained to her room and playroom and she must only pick it up every three weeks when the cleaning people are scheduled. It seems, however, her version of cleaning up means shoveling more stuff into the “Hoarding House of Death.”

We are at an impasse.

Selfishly, I like things neat. But I also want her to be able to find things because they are where they belong. I want her to stop asking me for scissors and tape because instead of putting them in the bin where they belong, she has put them in a bag when she was playing school three days ago and can’t remember which one. But I also don’t want to stifle her creativity when she packs up a bag with plastic food, a fake sword, and a pad of paper and pencils because she is playing Amazon Jungle Guide. For all that is holy, I just want her to unpack that bag when she is done.

So I implore you, dear readers, help me. Share with me your strategies. How can I make this work? Because it is a long 10 years ’til she heads off to college and becomes her roommate’s problem.