And each time I do it, I feel regret. I don’t know what causes these lies to spew forth from my mouth. I’d like to blame society, but, really, anything that comes out of my mouth is my problem and my fault. You see, what I lie about is my kids. And the reason I lie is because, well, solidarity. 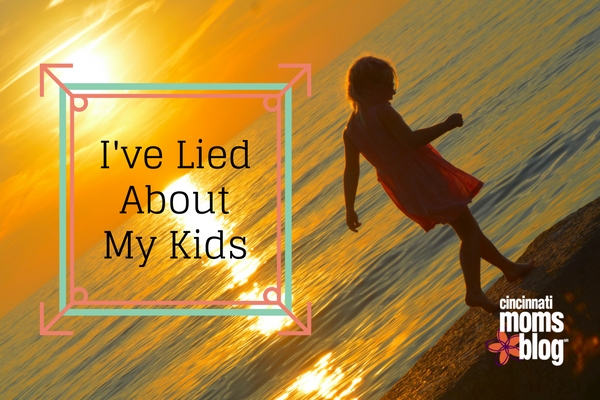 All the moms gather at the park. Or at the coffee house. Or on Facebook. And then they complain.
“Oh my goodness, you won’t believe what my kid did today.”
“Look at this picture of my kid covered in ice cream.”
“Ah, you think that’s bad? Last week my kid…”

Or, maybe it’s not a lie. But the sentiment behind it probably is. You see, my daughter gets herself into all kinds of predicaments. She’s two. She’s going to do this. She’s going to spit water out all over her outfit. She’s going to cry in public places. She’s going to latch on to strangers at the pool as if she’s just adopted a new family. She’s going to do a lot of things that we may not consider to be “good.” But, she’s learning, she’s testing her boundaries, and she’s becoming her own person.

Of course, sometimes I get frustrated. After all, there really is no negotiating with a tantruming two year old. But, in all honesty, I don’t really care if she throws herself on the floor of the grocery store. I secretly laugh at how cute she is when she covers her face in tinted Chapstick. I don’t mind too much when she cries at a restaurant. She’s learning how to be patient. She’s learning how to deal with her feelings. And I’m re-learning those same things right beside her.

I don’t want to lie. I don’t want to have to pretend that I’m upset about normal, two year old behavior. I want to laugh about it. Because in the grand scheme of things, it’s funny. It really is. And this doesn’t mean that I don’t guide my child in the right direction. I do. We talk about her actions. There are consequences to misbehavior. I ask her what she thinks she could have done instead. We hug it out at the end. Most of the time she seems to understand. I don’t need to rehash it. We’ve already lived it.

Kids are going to tantrum and cry and throw things on the floor. They are going to challenge us, but what they are really doing is challenging us to take a hard look at our own strengths and weaknesses. Are we patient? Are we kind? Are we compassionate? Let’s talk more about how we can become better people, and therefore better role models, and less about how our kids frustrated us this week.