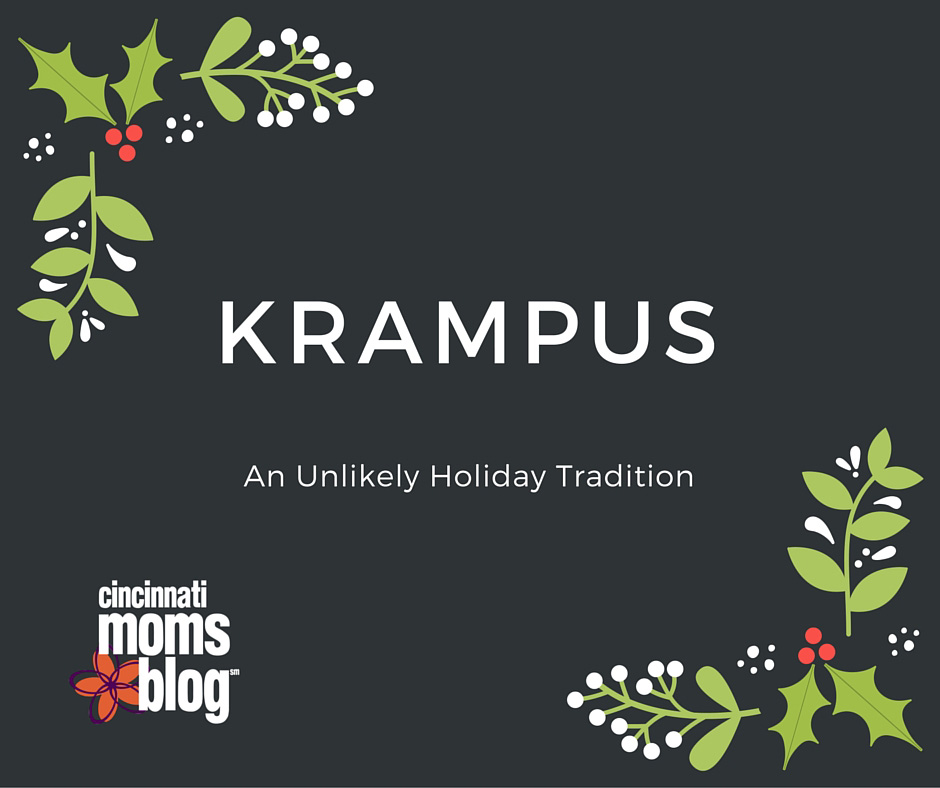 A couple of weekends ago I took my son to the Germania Society’s Christkindlmarkt or Christmas Market. It wasn’t just a whim that enticed me to go.  There was the boast of it being “the most authentic Christkindlmarkt in the Cincinnati region” … and the promise of Gluehwein (spiced, mulled wine) didn’t hurt. Without boarding a plane or driving for hours, this was my best option for trying to introduce this seasonal European custom to my son. It’s meaningful to me, so I’d like him to have some knowledge of this tradition as well as some lesser known, regional ones that I was lucky enough to experience while living abroad.

I was a German major in college; both of my degrees are in German linguistics. Over the years I’ve spent several Christmastides in one German-speaking country or another and have been to many a Christkindlmarkt or Weihnachtsmarkt (also Christmas Market). These things are magical. There are the beautiful ornaments and gifts, the twinkling lights during such a cold, dark period, a sense of community, good food and drink, and the awe of participating in something so old and steeped in tradition.

The holidays always make me nostalgic, so I’ve decided to take a few minutes to stroll down memory lane and share one of my favorite holiday traditions from three Christmases spent in Austria — Krampus.

This hairy, horned devil creature is so outrageous and fantastical that it is difficult to paint an accurate picture of an encounter with him for those who have never experienced the adrenaline-pumping horror/thrill of it. The easy explanation of Krampus is to say that he is the anti-St. Nicholas. He comes on December 5th and instead of bearing sweets and treats for the kiddos, he is laden with chains and has a bundle of birch sticks to beat naughty children into being nice. If this weren’t enough, legend has it that he then hauls the bad kids in his sack down to his lair in the underworld. Warm and cozy, huh?

I first became acquainted with this devil creature while living in Salzburg, Austria. Many Alpine cities, towns, and villages hold a Krampuslauf (Krampus run) on or around December 5. These runs are a parade of fire and nightmarish creatures, one scarier than the next. The Krampi either have sticks or long, horse-hair whips that they use to hit or whip randomly selected members of the crowd. They will get in people’s faces and growl or intimidate, pull hats over faces, push people over, and just frighten onlooker in general. These creatures are SCARY. Make no mistake. They wear giant bells that can be heard several streets over. In the days that follow the official runs, you will be going about your business at the Christkindlmarkt or walking to school and all of a sudden you will hear the distinct clanging of bells that can only mean one thing: Krampus is out and about and if he finds you, you’re in for a beating.

I have attended a number of Krampus runs and they were FUN! I would love for my son to experience this tradition on a smaller, not so scary scale. I’d probably skip Salzburg and go for one of the smaller ones aimed at more family friendly fun. The Krampi are still dressed in their scary costumes, but instead of whipping people in the streets, they just scare the onlookers or rub a greasy black substance on their faces. The Krampus runs are usually drawn to a close with an appearance from St. Nicholas who sets everything right again and sometimes distributes candy.

Unlike a Christmas market, the Krampus tradition is so ingrained in the history and folklore of its origins that it is impossible to recreate here in Cincinnati. I will have to rely on cherished memories, photos, and the internet to share this tradition with my son with the hopes that one day he may get to experience it for himself. Until then I will have to satisfy my European holiday yearnings  with the American version of the Christkindlmarkt.

What holiday traditions – new or old, far or near – would you like to pass down to your kid(s)?