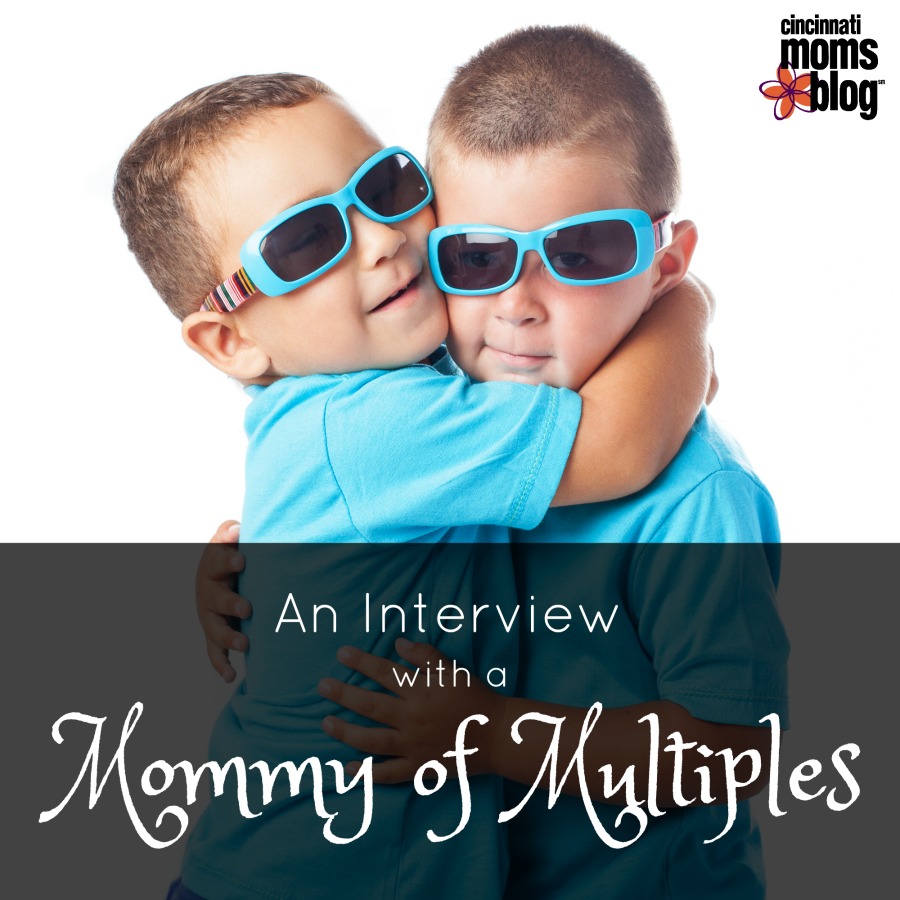 Michelle has been one of my best friends since high school. She was there for me almost every day while I was stuck in the hospital after having a very rough delivery with my own daughter several years ago.  When I found out she was having twin baby girls, I was so excited for her and her husband!  She is one of the most amazing women I have ever had the privilege to know, and I wanted to do something very special for her to celebrate her twins!

Michelle has a very giving spirit (which is why she went into nursing!) and loves to help others.  It was a long journey for her and her husband to conceive.  They kept things very private as they dealt with all of this alone.  Now that the girls are healthy and here, I asked her if I could interview her so she could share her story in the hopes that her struggles may help someone else.

After 9 months of being a mommy to twin girls, what is the first thought that pops in your mind?

Happiness is the first thing that pops into my mind when thinking about being a mom of twins.   It has been a long journey to get these children, and I am so happy to have them in my life! 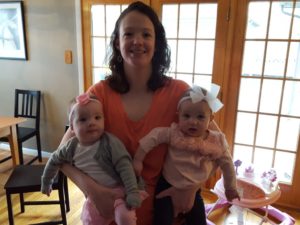 Do twins run in your families, or were the girls a result of IVF?

In July 2013, I had a large cyst removed from one of my ovaries.  It was something called a fibroma, which is benign and normally happens in woman over 40.  My OB suggested I see a fertility doctor and an OB oncologist because she has never seen anyone this young (I was 28 at the time) with this type of cyst.  Long story short, my husband, doctors, and I decided to do IVF sooner rather than later because I would probably have to have my ovaries taken out at some point.  I did not want to lose my opportunity to have children by waiting too long.  In May 2014, my husband and I went through IVF and we got pregnant!!  We implanted 2 eggs, and 1 took. We were so happy!

In early July, we went back to my OB for an ultrasound and there was no heartbeat.  We lost the baby.  My world came crumbling down, and we were devastated.  I ended up having a D&C in August.  My doctors said that I would be able to go through IVF again as early as October if we wanted.  After a lot of thought (and some therapy!) we decided to do another round of IVF in November.  I did not have any viable eggs left over from the previous round of IVF, so we had to do everything over – all the shots, drugs, and procedures.  I told my husband that this was the last time I was going to be doing this because it is such an up and down emotional roller coaster!  We kept positive though.  In the back of my mind, I knew with my luck, either it was not going to work and I was not meant to be a mother, or it would work and we would have twins.  I had to take a blood pregnancy test the day after Thanksgiving.  We were SO nervous and tried to stay busy until they called us with the results.  It was good news; we were pregnant again!  It was also very nerve-wracking because I was so nervous about losing the baby again.

What was your reaction when they told you their were two heartbeats in there?

When we went in for our first ultrasound, the doctor said, “Well, it’s 2 for the price of 1!” (really, in our case, it was 2 for the price of 2!)  We had to have him repeat it!  We were in shock and so excited!  After the initial shock wore off, we were not too nervous about two babies at once.  We figured, we may as well get everything done at once!  My husband and I are fairly organized and scheduled people, so it kind of fits our personalities.  Also, we both wanted 2 kids and not have to go through IVF again, so it’s the best of both worlds for us.  We were still very worried about the risk of birth defects and having premature babies but I was able to carry them both almost to full term!

What has been the biggest challenge for you and your husband with having twins?

The first few months of parenthood were rough!  We did not get much sleep at night.  We would wake up 2-3 times a night to feed them.  We were lucky that they pretty much kept to the same schedule.  The rule “never wake a sleeping baby” does not apply to twins!  If one wakes up eat, wake the other one up to eat too!  If you keep them both on the same schedule, it will make your life so much easier.  That is the key piece of advice with twins or multiples.  If you are going to change a diaper or feed now, you may as well make it 2 at one time so you don’t have to get up in an hour and do it all over again for the other one!  Also, it is difficult to find decent child care!  The most important thing is to find a person that has twin experience.  They will be understanding about keeping them on the same schedule.

Were you and your husband excited that you each had a baby that was your own mini-me?

Yes!  Bailey looks like me, and Reagan looks like my husband.  They have our similar personalities too.  Although Bailey is smaller, she has her mama’s attitude and stubbornness and is a bully.  Reagan is more laid-back and sensitive like her dad.  It is fun to see them interact now that they have developed their personalities.  They did not interact or notice each other much the first few months.  They would hold hands at times though.

What fun, creative ways have you come up with to celebrate each monthly landmark during their first year of life? 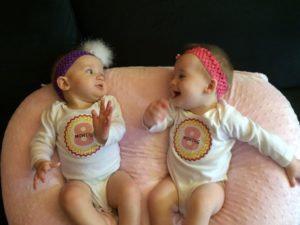 I very rarely dress them alike.  I want them to grow up and be themselves and not lose their identity because they are a twin.  One thing I do to identify them as twins is make them wear mix-matched socks.  They each wear a sock that is the pair to a sock the other twin is wearing.  That way people know they are together. However, each month for their birthday, we take a picture of them in a white onesie with the sticker of their age on the front.  We put the same bows each time on their heads and put them in the same position in our Z-pillow (a must have!), so we can see how much they’ve grown and changed.

What would be your biggest piece of advice to mothers-to-be and new mothers of twins?

Treat them as individuals because they are!  It’s hard not to compare them, but it’s important to let them develop and do things on their own time.  My “runt” is smaller and doesn’t eat as much, but she was crawling a month before the other one.  Don’t let yourself feel bad if they don’t do things at the same time.  Every baby is an individual.  I would also have to say that my husband and I love being parents of twins!  The greatest part is watching them grow and develop their own personalities and seeing how different they are.  One of the biggest challenges is finding time for ourselves.  We are lucky our parents are close and can come watch the girls, so we can have a date night or just some quiet time.  Make sure you do not forget about yourself and your significant other.  You are not selfish for taking time for yourself.

Are you a mother of twins?  What would your biggest piece of advice be? 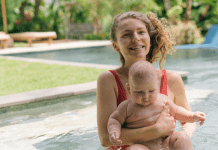 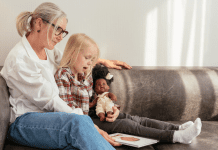 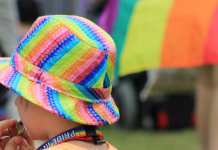