Full disclosure: I nursed my older two children for years. I’m talking darn near forever. Suffice it to say that it was longer than two years for both of them. EACH. It just worked for us, and I’m grateful for it.

I have read La Leche League’s Mothering Your Nursing Toddler. It meant so much to me back when I was a single mom with a little girl that told me she was never going to wean–her words, not mine. I revisited the book after I was married and with a second child. It helped us overcome some difficult years and obstacles. 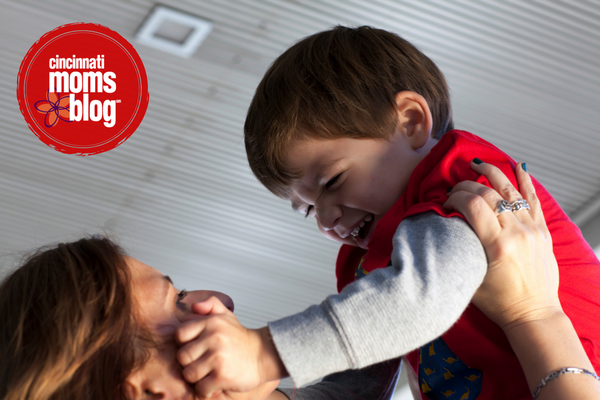 By the time the third little babe made his appearance in our lives, I was a pro at nursing and thought he’d follow in his siblings’ footsteps. He was a great nurser, but he quickly lost interest. I truly believe that once he could see that he was the only one latched onto my breasts and being spoon-fed, he quickly quit both. It was baby-led weaning at its finest, and I cried.

Now that he is two-and-a-half, I don’t know what I’m doing.

I can’t lean on what I have learned from parenting nursing toddlers. Whenever the older children needed comforting and encouragement and time away, to the breast they went. It was easy, it was nurturing, it was soothing–for both of us. Please read that as “I didn’t want to pull my hair out!!”

… because today, today I did want to pull out my hair.

It wasn’t anything big–it rarely ever is! I was doing dishes and his hat (that he chose to put on himself), a pilot’s hat, was too hot. He flipped out, so I told him to take it off. He was livid; how could I have such audacity to suggest such a thing?!

I know you’ve been there.

He is an intelligent little guy who is, in fact, highly opinionated. He is extremely verbal and can easily tell us what he wants. Instead, however, he whines. And I lose my cool. I have done it all, friends–imitated him, tried to shift his attention, shamed him, sent him outside, made him stay inside, gotten down low and talked to him, yelled at him, held him, laid down with him, ignored him, met his demands, and I have spanked him–YOU NAME IT! Undoubtedly, I struggle.

There is little wonder that I have been repeating 1 Thessalonians 5:16-18, “Rejoice always, pray without ceasing, be thankful in all circumstances; for this is the will of God in Christ Jesus for you.”

But I’ll be honest, I don’t have that joy about this little one. I feel my blood boil. I get hot and my breathing gets shallow. There, I said it. That sucks, doesn’t it? I know I’m not alone, though. I’ve seen it in stores, even if I don’t see it on Facebook or Instagram.

When our little man is being sweet, he is the sweetest, but when he’s off… it’s bad!

I’m thankful that God still loves, and is gracious toward me, when I’m “off”.

I have begun a different prayer. I have been asking God to change me–change my heart–so that I can understand this little one like He has understood me. I feel like it is more in line with God’s character, as revealed in the Bible, to change my heart rather than change my child at my request. Thankfully, He meets me where I am and doesn’t leave me like I was.

God pressed that on my heart this morning as I was doing dishes and as my son was quite literally melting under that pilot’s hat. I looked, heart racing, at the scripture on the cabinet above the sink: “Be anxious for nothing, but in everything, by prayer and supplication, with thanksgiving, let your requests be made known to God. And the peace of God, which surpasses all comprehension, will guard your heart and your mind in Christ Jesus.” This verse, Philippians 4:6-7, which I have read a thousand times at my kitchen sing, really settled in this morning.

I say all of this about nursing and grace because I have to remember that when my older kids were this age, they were still nursing… and they didn’t have a younger sibling yet. They were babies, and thus treated as such, for much longer. We have expectations and are blind-sided by reality because we aren’t paying attention.

I couldn’t just sit down and nurse him, so I grabbed the Ergo and put him on my back. I haven’t “worn” this child in a very long time! I turned on some worship music, to turn my attention away from myself, and sang to God for my little man… and continued to wash dishes.

He needed to reconnect with me, and ideally I would have stopped what I was doing to do just that, but this was perfect for what we both needed right then.

So I encourage you, Mommas, change your hearts when needed. Lighten up, even if that means to literally take on the extra weight of a big, little guy for a while longer. And, most of all, pray… because that peace will come, but you have to invest in it.

While it is cliche, the days are long, but the years are short. My oldest did eventually wean. She is now on the cusp of being a teenager and I regret nothing of those years where I mothered her as a nursing toddler.

I need to have grace for my current toddler, though, so I don’t bemoan these years where I’m trying to mother my no-longer-nursing toddler.