There are twin moms and then there are NICU twin moms and then there are premature NICU twin moms. I was the latter, diagnosed with IUGR (Intrauterine Growth Restriction) around week 26. We knew that the girls would not be full term and would likely be very small. Our hope was to get them to 2 pounds each but there was really nothing we or I could do to make that happen. We don’t know why I got IUGR but my pre-existing hypertension was likely the culprit.

The girls came at 33 weeks and 4 days, and so began our NICU journey. 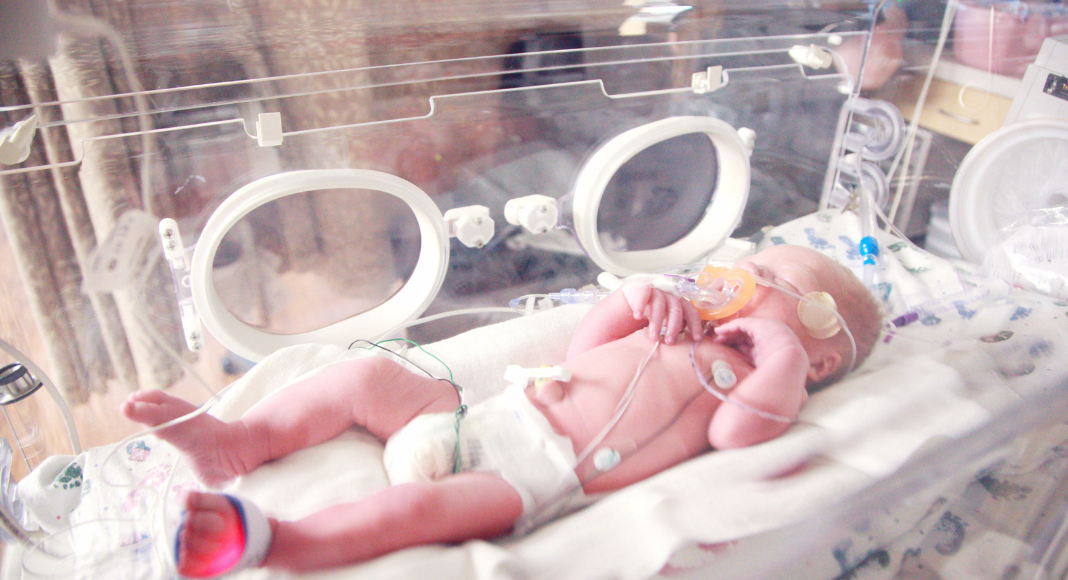 Luckily I had been given a steroid shot so they never needed any assistance breathing. And they were both just over 2 pounds! It was an emergency c-section, which we expected.  What I didn’t expect was that I wouldn’t be able to hold either of my babies until they were three days old.

Quickly after they were delivered, they were whisked up to the NICU and I took a turn for the worse. My blood pressure skyrocketed from preeclampsia. I was put on a magnesium drip (which makes you feel incredibly sick) and given more drugs via IV to bring down my blood pressure.

I remember being wheeled into the NICU in my hospital bed attached to the magnesium drip and was able to see the girls in their incubators. Phoebe had a tube that was inserted into her head because the rest of her veins were too small. Both girls had feeding tubes in their noses because they wouldn’t learn how to eat for weeks. They were the most beautiful, half-cooked creatures I had ever seen. I could see their features despite the fact that to most people, they looked like tiny birds. I think someone commented that they looked like cornish game hens, not even rotisserie chickens.

The next day was a complete blur.

You are normally only supposed to be on a magnesium drip for 24 hours, but my blood pressure was relentless so they kept me on it for 48 hours. I felt so sick. One of the nurses urged me to press the button that administered my pain medication so that I would feel better. It helped but it wasn’t until I was finally off the magnesium drip that I felt a bit more alive. The problem was that my blood pressure wasn’t improving. It was decided that I wasn’t allowed up to the NICU because my condition wasn’t improving. My husband showed me pictures of the girls, him holding them, my sister seeing them, but I had barely touched one of Phoebe’s tiny hands and Grace’s foot.

I must admit that when I hear soon-to-be mothers’ “birth plans,” I silently roll my eyes. In my mind, the only plan is to deliver a healthy baby, to feel the baby on your chest as soon as he or she is born, to be the first one to smell their head, that’s a gift – not a given. I was robbed of that and will never get that experience and it sucks. So if someone’s doula blow-up pool home birth doesn’t go as planned, I don’t have a ton of sympathy. I know some people have endured far worse than I have, but I wish there was less of a focus on a magical birth story and more of an appreciation for a healthy “boring” one.

On the third day, despite my blood pressure still being hard to manage, I was allowed to go into the NICU and hold both girls together. Each of their heads on one breast, touching each other resembled a heart shape and it was the fullest my heart has ever been. Feeling them and smelling them for the first time was something I will never take for granted. Bringing them home over a month later wasn’t easy. There were multiple medical issues to contend with, but I don’t ever take anything for granted. It’s really hard to be a new mom and in those hard moments, in the middle of the night, it’s hard to even imagine the light at the end of the tunnel. I wish I could go back to that version of myself and tell myself that they always are the light.