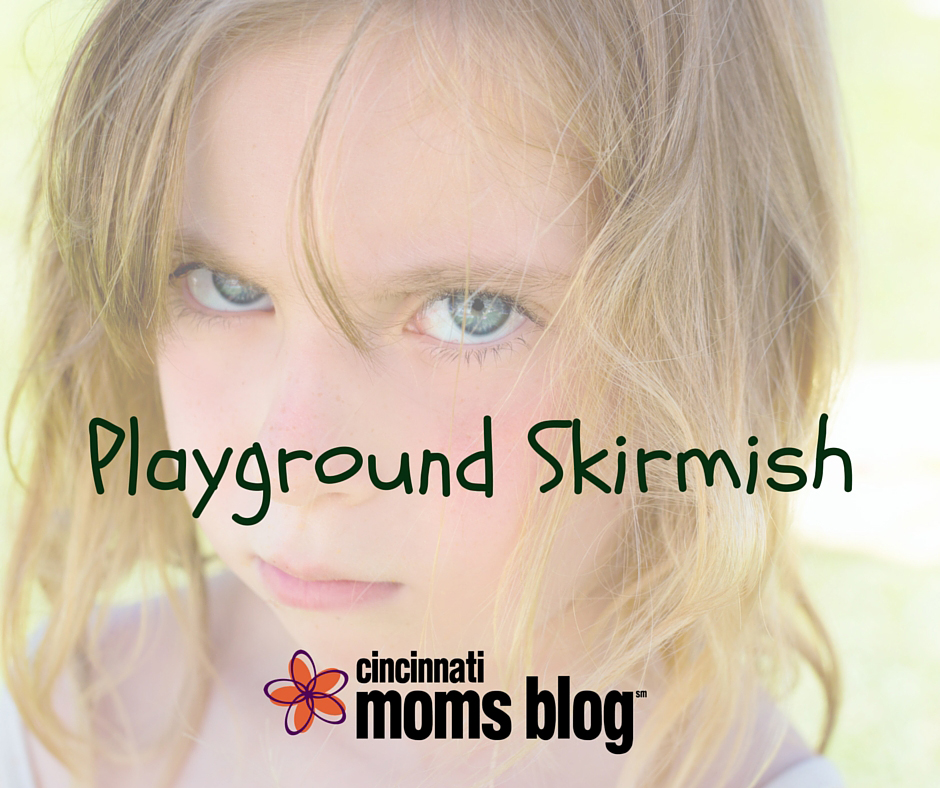 We were at a birthday party the other day. It’s the usual thing. Cookies and cakes, lots of fun stuff to play with and climb on. A good time is being had by all, though there are a few skirmishes that pop up from time to time.

In one such situation, a young boy slowly drags a giant inflatable lady bug up the playground equipment. It is hard to say what he was planning on doing, but If I were to venture a guess, I would imagine he was going to try and ride it down the slide.

My son, Milo, thought this was a grand idea. For a moment he tried to help the kid out, which caught my attention and then Milo plops himself down on top of the lady bug. Thus the conflict begins.

As a parent, there is a large part of you that wants to be defensive. How dare a kid put his hands on my child! Yet my dad brain watched the entire situation, and came to the conclusion, that while pushing my child makes me unhappy, and it is a poor means of conflict resolution, I realize we are talking about kids who don’t know any better. While I’m not thrilled that my four-year-old is now in tears, Milo was in the wrong, and he paid for it. It is a teachable moment, and I took advantage.

I ushered my crying child over the side and we sat down and talked about what happened. It wasn’t a long conversation. Milo easily admitted that he wanted to play with the lady bug, and didn’t wait to take his turn. We talked about his feelings. We talked about his actions. He realized the error of his ways as best a four-year-old can; he stopped crying, and found a new spot to play.

I don’t consider myself an expert at parenting, but I think, all things considered, that situation resolved itself quite well. Milo understood that what he did was wrong. Nobody was injured. The kids went their separate ways.

Or, so I thought.

I stepped away for a minute or two to get something to drink and stretch my legs. About two minutes later, a mom is carrying Milo’s nemesis over towards the side. He is crying. She bitterly tells one of her friends about that boy in the green shirt, and how he pushed her kid down and made him cry.

It is a weird feeling to hear people talking about your kid, complaining about them, calling them the bad guy. You feel a little embarrassed. You get a little defensive and angry too. Milo is a sweet kid. He is kind hearted and quite good at sharing. You feel the urge to point out that her kid hasn’t been innocent in all of this, but there really isn’t a point. Those types of discussions can’t happen when that protective; ‘mama bear’ perspective rears its head. It’s also just not really a conversation worth having.

I think the thing that irked me most, was the way that she talked about it. She wasn’t having a conversation with her kid about what happened, she didn’t talk to the kid at all. There didn’t seem to be any attempt to unpack the situation and take meaning or a lesson from it. It was very cut and dry. My kid is good and that boy in the green shirt doesn’t seem to be a very nice kid.

I don’t want to be too critical of that mom and her response to what Milo did, because as parents our instinct is to get defensive and protect or children. Though I can’t help but wonder if that response is always the best? We have a responsibility to advocate for our children, and I would never suggest otherwise, but we also have a responsibility to teach our kids how to assess and handle problems too. I don’t know if walking away and blaming, produces the best long term results.

As a middle school teacher, I have had a ton of conflict resolution with tweens and early teenagers. One of the first things I have the do, is explain the situation with “I” statements, as opposed to lobbing accusations about the other person.   The first step is to try and have the parties involved stop and think about their role in the situation. If allowed to do so, these kids would just point fingers back and forth and let their argument cycle. Yet, when they look at their role and involvement in the conflict, it becomes a lot easier to turn it around and move on.

Obviously, this type of thinking doesn’t work the same way for four-year-olds, but I stand by the fact that Milo was able to articulate his role in the conflicts that he had, and hopefully take something away from it. I never want him to walk away from an encounter, conflict, or situation with another person and not consider how he contributed to the outcome. I don’t want him to get into the habit of pointing fingers and assigning blame.