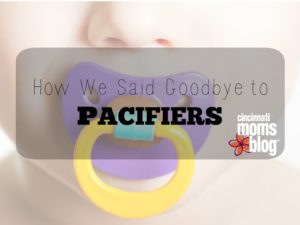 You know that moment as a parent when you make a split second decision and you just go with it full force? Well for me one of the very first crossroads I had as a new mom was choosing to embrace pacifiers. My daughter almost instantly upon exiting the womb wanted to suck on her fingers. I really was not at all surprised as in almost every ultrasound picture she was also doing this. So there I was day one, promptly sticking a paci in her mouth and removing her fingers.

I think I was somewhat scarred by the drastic measures my parents had to take with my youngest sister who insisted on sucking on her front two fingers until she was nearly 6 or 7 years old. They would dunk her fingers in vinegar, pepper; tape socks to her hands, and make every threat under the sun to attempt to get her to stop this habit. So I decided, right then and there, that I would choose the pacifier over the fingers. Split second decision: check.

Overall I am still happy with my decision. Ultimately the better of the two options that I saw before me on my sleep deprived, drugs, just given birth brain. What I did not fully anticipate was the intense love that my daughter would grow to have with her pacifiers. She never attached to a lovey or a blanket as an infant, but for the early years, every night, she slept with not only a pacifier in her mouth as well as one gripped tightly in each hand. For the most part we did a decent job of limiting paci time and as she got older we eventually only allowed them in the crib and on car rides (and obviously for comfort in moments of injury). Slowly we transitioned the paci to the bed only where I slowly transitioned her from having approximately 7 pacifiers scattered throughout the bed to just two.

As the 2 year mark came and went, I knew I was nearing the time when I had to devise a plan to ride our home of paci – which my daughter affectionately referred to as “poppies.” Though quick confession, I was almost as attached to the pacifiers as I think she was. My child was not the best sleeper during her first several months of life but something glorious happened when she was around 6 months old; she was able to grab the pacifier that had fallen out of her month with her hand and pop that beauty right back in, all on her own. The world slept again, I was at peace, and she was at peace. So you can image the PTSD I was concerned about experiencing if I should take the pacifier completely away and we would go back to full sleep deprivation.

Nonetheless, I braved the inevitable and began the anti-pacifier rituals that most parents do. I started with the books about not having a pacifier, daily had her watch “Elmo’s Bye Bye Pacifier” and also attempt to discuss with her that the pacifier was going away… soon. I am not sure if I expected that my daughter would listen to these books and watch this show and then one day just magically hand over all her pacifiers to me but that unfortunately did not happen.

We had to do something drastic. Split second parenting decision number 876… I decided that I needed to provide an exchange for the beloved “poppies” that would not seem so final to my daughter. Solution: (and I pretty confident is one of the best parenting ideas I have ever had) Build a Bear Workshop. On a fall day at two and half after some verbal persuasion my daughter loaded up all her pacifiers (well almost all of them, I stashed a few away in case my plan completely back fired) into her little dog purse and off the mall we went. We made quite a celebration of it actually. I let her choose ANY bear that she wanted. This bear was going to be her new special friend, just for her. As the store worker placed the stuffing into the bear along with a strawberry scent, my little girl kissed each of her pacifiers and placed them into the bear. With a quick pull of the string the last of the (known) pacifiers were secured inside. We continued through each of the stations, “bathing” the bear, picking out an outfit for our new friend and lastly choosing a name. As this was my daughter’s special event I gave no opinions as to what she could name her new friend. Without much hesitation, she appropriately name the bear “Poppy Bear.”

She was overjoyed with her new bear friend Poppy but I clearly knew we were not out of the woods yet. Night time was coming and in my mind, I had visions of a poor bear being shred to pieces as my daughter ripped her pacifiers out. As I laid her to bed that night, I reminded her that all her “poppies” were with her in her new “Poppy” that she could sleep with the whole night. As I left the room, I waiting patiently for the potential massacre to begin. After an hour I crept in to see my little girl snuggled closely to her bear. SUCCESS!!

4 years later, Poppy bear, who has been well loved and very tattered, still is my daughter’s go-to comfort item.  The pacifier’s that were put in can still be felt through the matted stuffing (and she still even smells like strawberries!). Who knows if this little idea would work for any other kiddos who are needing to part ways with their beloved pacifiers? But it was the perfect remedy for my little one.

Do any of you mama’s out there have any stories or methods of parting ways with pacifiers to help out other mom’s?