It’s time to start thinking about those New Year’s Resolutions. With that in mind, I bring you the pros and cons of running after having a baby – in my case, a half marathon. My race was run six months after, which is pretty early considering I waited the full six weeks for medical clearance to workout, and I had to wait an extra two weeks after that because my body decided that six weeks wasn’t enough. Which brings me to lesson number one: no matter what, listen to your body! Furthermore, I didn’t run while I was pregnant. My son was born at exactly 40 weeks. That’s 40 weeks of not running, or really working out in general. I did do some walking, and with a daughter who was 22 months when my son was born, I did get the “Toddler Workout” I suppose. But really, I started at zero. And by 6 months, I ran the Queen Bee Half Marathon in two hours and eight minutes! Here are a list of my pros and cons in case you are considering tackling this epic challenge. Let’s start with the cons, so we can end with some positivity! 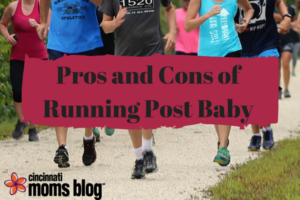 Cons
1. Medical clearance. You need a solid 10 weeks to train at the very least. I did a 12 week plan and started 2 weeks before that, so it was really 4 months for me. I waited until 6 weeks postpartum and my doctor signed off on resuming physical activity. After that, I started SUPER slow. My first “run” was a mile. After a few of those, I had to back off for a week because my body wasn’t up to it. After a week and a half break I tried again. Point is: LISTEN TO YOUR BODY! DO NOT PUSH IT! I eventually built up to three miles. I then decided to join a running group in order to force myself to go super slow. I typically run 9-10 minute miles, but I opted for the 11/11:30 minute mile group so I wouldn’t over do it. My goal was to finish and finish without injury. It’s not like I was going to win the thing! But, it was really hard to feel so slow.

2. Nursing after a long run is the worst. Nursing after any run is not very fun. But after running 8, 10, 12 miles… Ugh. I just wanted to shower and brunch. Not nurse. But I did. And whether or not my milk supply was affected, well, I’m not entirely sure. I struggled to nurse my daughter (and didn’t run after her birth), but I also struggled to nurse my son, though with both I made it to 6 months exclusively nursing/pumping. So I’m not one to have a freezer stash, but I did keep my son alive.

3. Exhaustion. Babies don’t sleep. And I stay at home with my 2 year old and my baby. My son was too little for the jogging stroller, so I had to run either early in the morning or late at night. Either way, I was exhausted. Three runs during the week and a long run on the weekend and not a lot of sleep. But I did it!

4. The heat and humidity combined with hormones. I sweat a lot after pregnancy. Combine that with the ridiculous heat and humidity this summer, and it was really a miracle I even made it out the door. One time I came home and my husband thought I had jumped in a pool. I hadn’t. (This also further explains why I disliked #2 on this list!)

5. At first you will feel really out of shape. And it won’t be fun. And the Cincinnati hills are insane. (DO NOT AVOID THEM, THOUGH! They make you so much stronger and there’s no better feeling than literally getting over the hill.) But this affects everyone who is new to running, or who is coming off a break or an injury. So take heart! Really, consider this to be is a pro because by the end of your training you will feel like you can conquer the universe.

Pros
1. Running is amazing mentally. Yes, at first it’s a challenge. But the more you run, the stronger you become and the better your mental state becomes. The “Runner’s High” isn’t a myth. The run itself may not be so much fun, but the endorphins and health benefits to your metabolism last all day. I was so much happier post-birth this time than I was after my first child. It has definitely given me an amazing sense of accomplishment. I dealt with the baby blues after my first pregnancy, but this time, they were nowhere in sight. I think running had a lot to do with that. I also lost all of my baby weight by the time of the race. It took me over a year with my first child. I didn’t run for that purpose, but it was an added perk, I guess.

2. The calories from nursing combine with the calories from running means that you can have your brunch and eat it, too. All the brunch. Long weekend runs=brunch afterward. They just do.

3. ALONE TIME. I know many people choose to run with a jogging stroller. I tried that eventually after my first child when she was 9 months old. It was debilitating for my confidence. I was really out of shape and then I had to push a jogging stroller, too. It didn’t work out very well for me. So I chose to run alone this time, even if it meant weird hours. And just being alone with nobody climbing on me was the best feeling ever. And then I was such a better, more engaged Mommy when I came home.

4. The best shower of your life. Trust me. Go ahead and be wild and take a mug of coffee in there with you. Stay for longer than you normally would. Crank up that heat. It’s the best. And it’s more alone time.

5. The bragging rights and the look of shock on other people’s faces when you told them what you just accomplished. But in all honesty, I find that running just generally makes me a happier person. Bragging rights or not. Running a half marathon is amazing no matter what stage you find yourself in life.

Now remember, you don’t have to start right after having a baby. You can start whenever. Kids, no kids, 6 months out, 10 years out. Avoiding the nursing, pregnancy hormones, and extra sweat are added benefits if your children are passed the baby stage. No matter what, the trick is just to start! The Flying Pig is coming up, and official training begins in January… Who’s in?!?!

Plus, you get to look THIS COOL when you finish!