I stood at the sink after the conference championship win, washing black and orange face paint off my skin. The tiger stripes were drawn on my cheeks by my 4-year-old daughter. My husband and I threw a watch party for the Bengals game and we told our daughter she could decorate everyone’s faces, which of course, was exciting for her. How often do your parents let you color on the faces of your relatives?

But it was a special thing and now even bigger since our team won and is moving onto the Big Game.

As I washed my face, I was thinking I hope she remembers this game and the next; if she does, her first memories of the Cincinnati Bengals will be much different than mine.

I was born in Cincinnati in 1988, which is the last year the Bengals went to the Big Game. The first memories I have of the Bengals are of my dad and grandpa sitting on the couch together, watching the game and complaining about how terrible they were. I think I was 5 or 6 at the time. But even though they complained, yelled at the television, and ended many seasons disappointed, they still watched. They still wore the jerseys, the faded hats, went to the games, and still supported this team.

I was too young at the time to understand why they weren’t playing well, what needed improvement, and why my dad and grandpa wanted them to win so badly. All I knew was that we were supposed to cheer for them and hope they won games.

As I got older and started understanding more about how this whole football thing worked, I adopted my dad’s feelings. The feelings of team spirit, followed by disappointment, and eventually, my own voice yelling at the television. And that was the routine, every August brought a new sense of hope, “This could be the year!” and every January brought about disappointment with a, “There’s always next year…” Followed by a February wishing it was my team playing in the Big Game instead of the Steelers, Packers or Patriots. It seemed so easy for these other teams, but the Bengals just couldn’t seem to go all the way to the Big Game, or even part of the way.

I never knew that feeling of having a team go all the way, and neither did most of the people I was around. If they did know the feeling once, like my dad, it had been so long they had forgotten what it felt like. But now here we are, and things have changed.

The Bengals are going to the Big Game!

Something I have never been able to say. This is finally the year! It is an incredible accomplishment by the players and the Bengals organization. The odds were against them and hardly anyone, even lifelong Bengals fans, thought they would be here.

Cincinnati is now the city and the team everyone is talking about. The city is glowing with orange lights and even people who don’t follow football know this is a big deal. The city is unified and excited to support its team. It is a wonderful thing to experience.

However, even though there has been this shift the past few weeks, knowing now that we can win, I still keep thinking about those first memories I have of the Bengals, with my dad and grandpa complaining and yelling at the television. I can’t help coming back to this because it makes me think of my own kids. The next generation of Bengal fans that are being raised now. 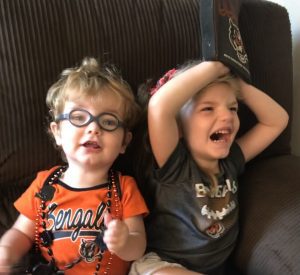 My first memories at about age 5 were of a losing team. Now my daughter is almost 5, and it is likely that her first memories of the Bengals will be of a winning team, one who went to the Big Game. She will have exciting first memories of them. I think that is an incredible thing because if I can have pride for a city, become a lifelong fan, and stick with my team through all the ups and mostly downs, just imagine what kind of pride my kids could feel for a team that wins and brings a whole city together. 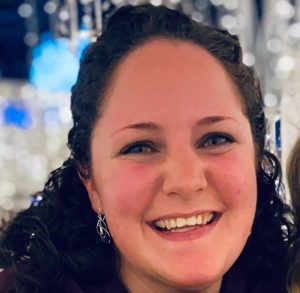 My name is Andrea Mirlenbrink. I was born and raised in Cincinnati and never left! I live on the west side with my husband, daughter (age 4), and son (age 2). I went to the University of Cincinnati and I have a bachelor’s and master’s degree in English literature and creative writing. In my spare time, I like to read, write, craft and do all things Disney with my family!