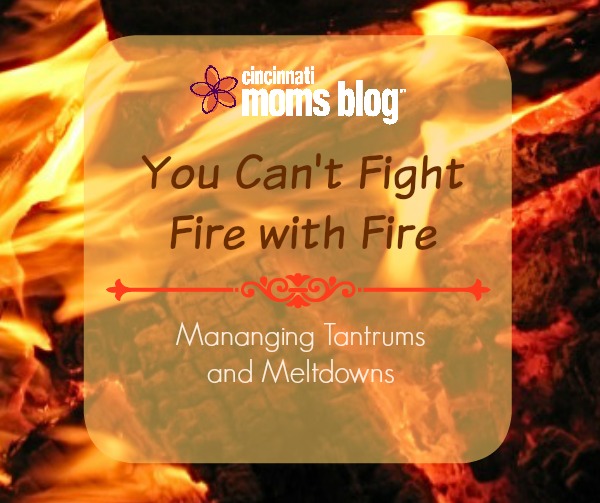 You can’t fight fire with fire, or so they say. This common phrase came to mind the other day when I was watching my nearly four year old boy starting to smoke out his ears. Not literally, of course, but you know what I mean.

For my kiddo this looks like taking a solid stance, usually beginning to make fists of some sort. It often climbs the hill to stomping, yelling out, and at some point he is completely engulfed in his feelings (none of them good). This happens at home often lately, but in public too (yikes!) and I have to tell you that I’m finally starting to identify what I can do to help (or at least not to hurt).

He starts small, and so do I:

A clasped fist followed by a stuck-out tongue is met with my tone shifting from calm kindness to firm direction “That is not kind. Your tongue needs to stay in your mouth.”

And then his feelings get bigger, and so do mine:

A stomped foot and an outcry of displeasure is followed by “Buddy, please take a couple deep breaths and think about your attitude right now. Choose to use your words and tell me how you are feeling.”

And then he loses control, and I…:

He’s angry about something, nearly always that he didn’t get what he wants. But I can’t understand him because he’s screaming now and has fallen on the floor in desperation. At this point I usually still have my cool, and I sit down next to him to comfort him, but unfortunately my efforts are greeted with a swat and a mouthful of spit. Yep, my sweet and precious boy has just spit (maybe at me, maybe at the air, it doesn’t matter – all bets are off).

The battle could easily continue:

That picture is one that started to play out one day in my house and (only by God’s grace) I stopped short of doing and saying a lot of things I would have regretted. I absolutely did get spit on and he absolutely did get carried to his room, but I did not raise my voice and I did not touch him with any level of aggression. Maybe your encounters with your littles (or your teenagers if they’re anything like I was) look a lot like the one I shared.

For me, it’s about recognizing that where there’s smoke, there’s fire and what to do when you smell smoke. I can’t say what will work for your kids, but here’s what’s working for me when I start to smell smoke:

Be aware of the escalation friends.  Tantrums, meltdowns, fits, whatever you call them – they are like fire, and they cannot be put out with fire – only water. Fires often start with smoke, so it’s critical to be aware of those behaviors in our kiddos and not to match them.Fire leaves burns, and it’s our job to treat them, not to cause them. As parents, we’re the ones responsible for lugging over the hose and hooking it up to the hydrant, even when we don’t feel like it and especially when we’re starting to steam ourselves. In fact, if we’re wise, we’re regularly wetting the soil in our homes by managing our own frustration well so that smoke doesn’t become fire in the first place. Teaching our kids to use words instead of actions, to burn off their anger in a healthy way, and to use self-control are life lessons that will pay dividends for the length of their lives.