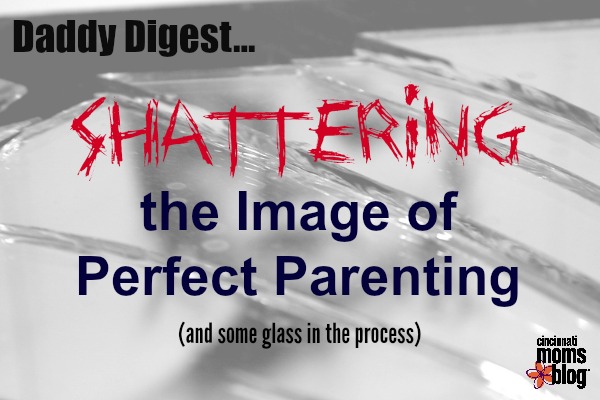 In the summer of 2007, long before I became a parent, I was participating in a teaching residency program in the City of Chicago. There, I met a fellow teacher named Chad who said something that has stuck with me ever since.

“I’ve never learned anything by doing it right,” he said.

It is good advice too. It is the sort of thing that can reassure you when you mess something up and are at the peak of frustration. It is an excellent insight for students who are having a really difficult time figuring something out.

It’s also, I have come to realize, pretty good parenting advice too.

When I think about my parents, I seldom have memories of them making mistakes. I can only imagine that they did, but they certainly didn’t feel inclined to fill me in on what those might have been. Granted, there was the incident with the handsaw and my face, or the time my entire body fell into a long line of rose bushes while learning to ride a bike, but those are also cases where I heartily contributed to my own misfortune.

When all is said and done, I have this image of my parents as people who didn’t make mistakes, and didn’t mess anything up. It is comforting to know that my parents weren’t complete and utter screw-ups, but I suppose it leaves a lot to live up to.

I make mistakes all the time.

Like how earlier today, running around with Milo acting ridiculous, when a thoughtless swinging of an object not meant to be swung smashed and shattered the glass globe in Milo’s light fixture. I told Milo to sit still, and I cleaned everything up. It took a little bit of time, but it really wasn’t a big deal.

While cleaning it up, Milo, who is nearly four, and I had a chance to talk about mistakes. He would say things like, “It’s okay, it’s only an accident,” and things of that nature. This, of course, is really reassuring, because it means that the lessons we have been trying to teach him when he makes mistakes are sticking.

He asked, “Why did you go and break the light?” Which gave me the chance to explain, that I was acting a little too silly, and a little too crazy, and I wasn’t thinking about what I was doing, and because I was acting that way, the light got broken. I also explained that it was important that I learned a lesson from my mistake.

I cleaned up the glass.

Then we moved on.

I suppose part of me should feel concerned or embarrassed that I managed to break the light fixture. It really isn’t the sort of thing that composed and controlled parents are supposed to be doing. Perhaps I should have learned this lesson when I was a child, when a flipping Ken doll managed to shatter a similar glass globe in my sister’s bedroom.

But, I don’t feel concerned or embarrassed.